Ya, it was a while ago, but it's worth sharing.

Open Options Shawnee Mission Triathlon was waaaaaaay back in July, but I owe a race report and I don't disappoint... if you count better late than never. 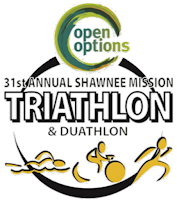 If you recall, I was racing as an ambassador with Open Options as they were the title sponsor and wanted to gain some traction and visibility as to what their organization was about and why they teamed up with the race.  They divided into teams for fundraising and I was on board with Team Red and Sheryl.  I'm happy to report we met our goal for fundraising very early, and while I would like to take all the credit, I'm sure I was only responsible for like 10 percent of the effort put into supporting the teams.  I did the "fun" part like train and race.  ;)

This was my 6th time in the race and 10th time doing an endurance event at the park.  Read more about pre-race HERE if you need to jog your memory.

What's the deal with the weather?

It seems like this race gets some sort of weather that shortens or cancels the event every other year, but this year the weather held with no rain and the event went off without a hitch.

I must also add in that last year I was dealing with a foot injury and only competed on a team where my runner ran us into 3rd place.  It was nice not having weather issues and actually doing the whole long course this year!

It's not lightening fast, but it's non-wetsuit and swimming into the sun for the last 400 meters or so.  Since I don't swim like a fish, I'll take it.

In reality it's a time trial rolling start, so you get some space between you and others and it's nice to not have to fight a large group battling to get to open water and perhaps catching waves in front of you.  As I mentioned, the only drawback is coming back with the sun in your face and having to trust a little bit on instincts to site and stay straight.  Lets just say I smacked the guide rope for the buoys often.

I do enjoy the swim from the marina parking lot where the start is on the swim beach.  Nice warm up and open area to get some nerves out.

Back in 2012 I was able to get above 20 MPH on this course, but man those hills just kill on the 4 loops.  That was my third best time on the bike, but not much separated the times.  I pretty much put all I had into attacking the hills and figured I'd pay for it on the run if I needed to.

Pretty much the entire loop has been repaved in the past few years, so no more chip seal on any part of the course!  Here's to hoping they never use chip seal again, because that sucks on a bike.  Really I have no excuse for an "average" performance on the bike other than the lack of focus to improve rather than maintain my bike power.  Off season focus this year.

This run edged out all past runs (minus last year where my relay partner laid down sub 7 minute miles).  I was content for this run setting a run PR after being pretty aggressive on the bike for what I could throw down.  The weather helped out a lot as it wasn't near as hot as it had been in the past.  The dam hill always sucks, but you know it's there after riding it 4 times on the bike.  At least it was only one time on the run.

Overall I was fairly satisfied with my race time vs effort and timing on the race calendar.  I had IM 70.3 Racine the following weekend and didn't want to require abundant recovery or risk injury before that race, but I wanted to run it hard and see if I could PR.  Sadly I did better in 2013, but mainly due to less than a minute better on the swim and saving time in transition.  My bike and run was better than 2013.  Odd how the small things make a difference. 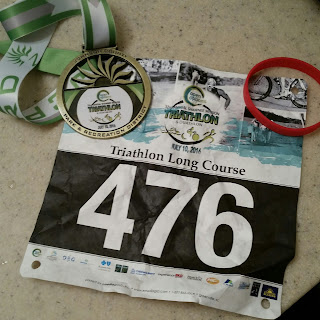 Sadly the race also had over 100 less racers than 2013.  The event seems to be losing some steam over the years, which I'm not sure why since it's not on a holiday weekend and is very affordable.  Maybe too many races diluting the landscape.

I though with the addition of the finish line festival with Open Options would bring in a few more people giving families and option for kids to stay entertained while mommy or daddy was out racing.  They seemed packed, but just didn't pull in the racers like in the past. 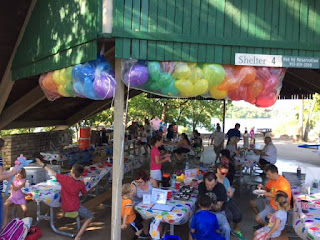 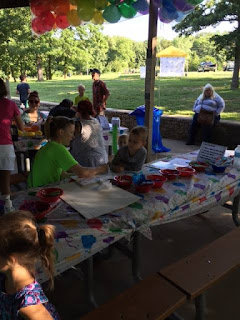 If you have raced Shawnee Mission in the past and don't know, or wasn't interested in signing up, I'd be curious as to why and maybe what they could do to get you back.  I would hate to see this race go the way of Jackson County that is now defunct after 35+ years.