LOOK!  I race recap out IN LESS THAN A MONTH AFTER THE RACE!  Be still!

Don't get too excited on me.  Still a few weeks behind, but here it is in all it's glory.

I opted to run in the latest #AccelerateHope edition of the ASICS Gel Cumulus 18's.

I traded out my 2015 model and got enough training miles in that I figured I'd be ok using them for the race.

I really wasn't sure what I would be capable of on race day.  Training was spotty at best, hitting mostly 4 of 6 planned training runs a week.  My target was keeping the LT and long workouts in for sure and fitting in or combining other moderate workouts.  With a newborn that gets up at 4am and a job that requires me leaving home very early, it was hard to get AM workouts in and not all lunch brakes were open to get runs in.  It didn't help with the weather getting to 100+ heat index during the bulk of training over lunch.  Lets just say there were a handful of workouts that didn't meet the goal of the workout.

But, I knew I could do the distance.

We received warning emails for "heat" being higher than past races.  By high, MAYBE getting to 80 for the high of the day.  I was ok with that since the start at 7am would be in the 60's and it was cloudy with wind all day.  It wasn't optimal running conditions, but better than some races I've been in.

I was on my own for the race since my wife worked her shift the night before.  I was just grateful it worked out that I could run the race.  You never know with the variable of 3 kids and 2 working parents.  You get what you get and you don't throw a fit.

For better or worse, I chose to start with the 3:15 pace group and see how long I could hold on.  I knew if I started with 3:30, I'd tail off and lose that pace.  I figure start fast, finish meh...

Main goal was not to have to pee every other aid station.  I took like 4 port-a-potty stops in 2015 and still managed to pull a 3:28 out of my rear end.  It was a delicate balance of proper hydration, timed pre-race peeing and hydrating during the race.

They had to change the course pretty drastically to account for construction on a section and having to make up the distance over the course.  It wasn't a huge issue, but contrary to popular belief, Kansas (Missouri in this case) is not pancake flat and the changes at the beginning seem to add up to more elevation gain than years past.  Just felt like a lot more work to get past the first 5 miles than years past.  Maybe I just wasn't trained up the same as years past with no full IM race and lighter race schedule...

I did keep my promise and only needed one potty break and took minimal walk breaks for fluid and a GU. 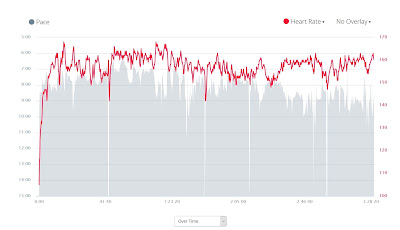 As the facts will spell out, I ran a hard race in the first half and I could tell.  Around mile 11 I lost the 3:15 pace group and slowly slid back on my pace.

Mile 18ish I was feeling the onset of cramps and well past the window of my Hotshot muscle cramp supplement.  Should have brought an extra for later in the race.  Yes, I was sweating pretty good with the "heat" and humidity, but nothing I had not dealt with before.

The main issue was pushing so hard for a lot longer than I was trained up for inducing muscle fatigue to the point of cramp onset.  It was a delicate balance of pacing and knowing when to walk it off.  The last 3 miles was a very stiff and ginger hobble to the finish.

But my time wasn't too shabby...

It felt like I worked a lot harder for that time than last year's 3:28, but the course was changed and the humidity was up.  Lets not lose sight of dealing with the new course and lack of traffic control from mile 18 to 24ish.  We were dodging cars and "spectators" not interested in avoiding wackos running a marathon.

But, my suffering would not be factual without pictures...

I actually followed my marathon plan at the right starting point, but I could definitely tell I was not ready for a sub 3:30 effort missing at least 1 planned run a week.

I'm not of the opinion that volume makes you faster, but if you boil down your workouts to the base limit, you can't skimp on them.

Oh, and you can coast a little on past endurance built up over seasons of longer distances.  Racing and training for full IM distance triathlons definitely helped me skimp on workouts and keep a 3:30 time.