So it's been a while since I ran the Hospital Hill 5k, Half Marathon and Legends Free State 70 Triathlon...

But the race report is better late than never, right?

This was a unique weekend taking on 2 running races and a triathlon 3 days in a row.  It's been like this for these races for a long time that the fall on the same weekend.  I used to choose the triathlon  that was formerly IRONMAN 70.3 KANSAS over doing the half marathon the day before.  I would run the 5k with my wife at an easy pace as a shake out for the half IM the day before and put all I had in the half IM.

Now that IRONMAN dropped the race and it's been independently ran, I've taken a more laid back approach and used the races as a long training weekend and just tried to "enjoy" them, if you can.  I more enjoy crossing the finish line, but it's all good.  You can read more about the justification for racing all of them in the same weekend in my pre-race write up from 4 months ago.  ;) 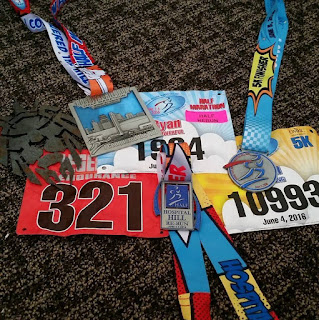 The good news is, I started and finished them all.  It was tough Sunday morning getting up for the half IM knowing I'd be out there for over 5 and half hours after getting up Saturday for the half marathon.  Once I got up, my mind was so far behind that I didn't have time to have rational thoughts like, don't do this you idiot.

Really, my only thought was running the race and getting back home to the family.  I can do a 5k around home for free and not have to drive to get there, but working downtown I was 10 minutes away so it sort of was convenient to come after work, get my packets and run the race and head home.

There was no time goal, but more just to stay fresh for the next two days.  I learned from running with the two big kids in a stroller for 2015 trying to keep them under control, it killed my quads on the downhills.  That was the most difficult part of 2015.  This year it was just me, so good leg turnover and running smart. 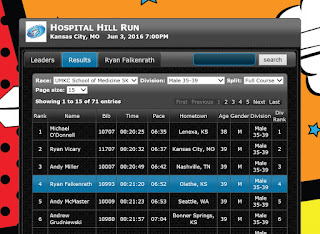 This is where is was starting to grind.

Weather was perfect, but I much prefer sleeping in to getting up to run a half through a bunch of hills, but I did do it to myself.

This is where it was back to basics with the training run mentality.  I was not concerned with time other than trying to stay under 2 hours and not pounding my legs on the downhills.  Ironically sprinting downhill causes more issues than trying to kill it going up a hill.

This was all more about tradition running the HH race and getting a high volume weekend in that would be my only real chance before IM 70.3 RACINE.  The rest of training would be shots of an hour at a time at higher intensities due to work change and adding a new baby at home.

Really the race was uneventful.  Took water at aid stations and Gatorade every other and wrapped it up to get the medal for the half and extra medal for the re-run series.

Really... I count this as a half ironman even though they only advertised 70 miles.  Plus, my Garmin hit 70.3, so it counts.

It this point getting up for 70 miles was wearing on me, but looking back it's not that much more than a high volume weekend that I have done before training for a full IM.  It's really not that much of a stretch other than driving to the event locations.

The only real difference of note aside from treating it more like training than an A race was working on nutrition.  Cramping, dehydration and eating too much has been an obstacle at the half IM distance.  I believe in the past I would utilize too much solid food, too much sports drinks or drink mixes and not enough water.

I brought enough food and hydration mix with UCAN and Clif Bars to stay under 300 calories per hour to avoid gut issues.  I also brought enough water to fill my frame mounted hydration and a water bottle on the handlebar mount.  Goal was to have all the water gone and eat just enough before hitting the run and cutting off solids for the run and stick to water at every aid station and sports drinks every other.

I mean really, for half marathons, I don't really eat any nutrition and only drink water when it lasts around 1:45.  Heck even for training runs I'll roll out of bed without much hydration or nutrition and crank it out and somehow I survived.  I think there's a stigma around running a longer distance event and feeling the need to pack 20 GU's and 10 clif bars with 24 ounces of sports drink or other mixes.  Really, more is less with food and water is what most should be more concerned with.

Long story short, I was focusing on the fundamentals of the race and not killing the course.

For the most part, it worked.  I could tell on the bike leg I ran 16.4 miles the two days before.  It really kicked in on the hills and my bike split showed how much I didn't have in my legs.

The swim at 34:47 was spot on.  I really found a good groove and stuck with applying force on the pull without going anaerobic.

The bike was draining taking 3:15.. for a whopping 17 mph average.  I had killed this course above 19 mph in the past, but this was a new day and after running 16.4 miles the two days before.  Excuses excuses... blah blah blah. 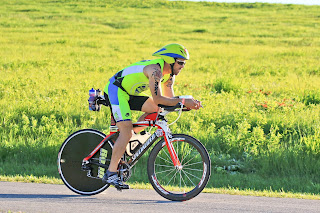 The run wasn't half bad at 1:53.  I wasn't burning up the course, but it was solid and I felt confident in my nutrition and hydration plan for the HIM distance. 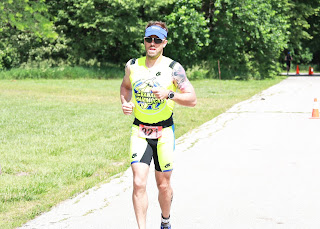 All in all I had a great time tackling the challenge of 3 races in 3 days.  I'm glad it wasn't 3 half or full IM's in 3 days, but under the circumstances of working for a living, having 3 kids of which one is a newborn, I'll take it.

Sadly I'll be looking at the same issue in 2017 with all races on one weekend.  I'm not sure how the cards will play out or if I'll be dumb enough to race the 100 mile triathlon on Sunday like I did in 2015.  We shall see what can be done, meanwhile stay tuned for more race recaps!