And in true Training Daddy style and fashion, this recap is getting written up before the Rock the Parkway Half Marathon that was a few weeks ago.  That’s just how I roll in today’s fast paced world.


If you recall, my preview laid out some potential weather pitfalls and a big question mark on how I thought I’d do.  At this point in my alter ego lifestyle as a wanna-be super endurance athlete, I shy away from making any predictions.  I train what I can and try to stick to a plan and let the race unfold as best it can.  Trust in your training, save your day it will.


Out the door and to parking 10 minutes before transition opens = PRIME parking + breakfast time + nap time in car before even unloading for the race.  Assigned racks made it easier not to have to worry about getting in super early.


The only issue was digging out my timing chip so they’d let me into transition.


It was entertaining since I signed up early bird, my number was 9, which meant I was the first row of racks by the swim exit.  Convenient since I wear my shoes in transition and no worries about stepping on rocks before the bike mount.


Pre-race was uneventful getting all my gear ready and being prepped and ready to go with enough time for one last port-a-potty stop before swim start.  Just the way I like it.


They changed up the swim start and exit from last year, which worked fine either way for me.  They said it was for athlete benefit, and I’ll take their word for it.  Didn’t really make it better or worse for me.


To be ready for the 40 degree air temp and 60s in the water, I had the full sleeve wetsuit and neoprene swim cap under the race supplied cap.  It worked like a charm as I could actually feel my hands after the swim and felt warm enough that I left my jacket and gloves in transition when I headed out on the bike.  That was a relief not to exit the water and not being able to feel my hands.  No worries.  I was almost warm!  I did pull a trick of leaving under shorts on for the swim and throwing my tri shorts on in transition.  I think having dry tri shorts helped out.


It was almost comical being in the position of catching the waves of swimmers in front of me these days.  I have to take a minute to realize where I came from hardly being able to finish a 500 yard swim and being next to last out of the water to worrying about a good spot at the start and navigating the waves in front of me.  I’m not burning it up, but not exactly a slouch.


Interesting tidbit: I guess a deer was jealous that we were having all the fun and wanted to swim a few laps.  Check out the KC Tri Facebook page to see the video.  https://www.facebook.com/kansascitytriathlon/?fref=nf 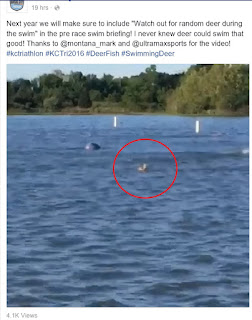 And, this is the 2nd time I have had my swim HR strap for my garmin and actually had heart rate data for the swim.  It’s interesting as I have never looked at what my HR is doing in a swim.  As you can see, it’s actually pretty elevated at 145ish (notice the spike for the run at the exit and run back in for the second lap).  I’m curious to see how it looks in other events to see if water temps make a difference or as training progress and distance is added in events. 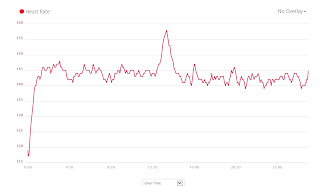 
I downed some #ItsTheNerve anti-cramp before the race, knowing I have a tendency to cramp in the swim and in cold conditions. The swim went fine, but the first 2 to 3 miles of the bike, my inner thighs were tight and twitchy. I was a little worried I’d be looking at cramping early in the ride.


Luckily, I spun the gears and waited to really get into it for the first 5 miles.  After that the twitches went away and I was able to get back into my game plan.


I wanted to hammer a little more than I did, but I knew I also wanted to hammer the run.  I was looking at better than 20mph on the bike and I was pretty good with that considering my training schedule and lack of consistency.  I was able to get above 20 mph without killing the legs.  Mission accomplished.


Interestingly I downed UCAN Superstarch and UCAN hydrate in my water bottle with water and a GU gel.  Other than that I didn’t feel hungry enough to eat any pre-swim nutrition aside from breakfast at 5 and left the bonk breaker bar in my bike pocket.  Nutrition wise, I was doing fine and not really feeling the need for extra intake aside from UCAN and the GU shot.  I knew I wasn’t going to take anything but water on the run for the 6.2.


On the weather side, the sun was out and I was good to go with just the tri kit.  No jacket or gloves needed.  There was a minor chill, but nothing debilitating.  All that worrying for nothing, but at least I was prepared.


This was actually a slower run time than last year, but not by much.  I had a bit of gas coming off the bike and starting the run.  I might have taken in GU too close to the run start, but I managed it by slowing up to let the pressure equalize… aka farting and burping it out.  Never trust a fart unless you HAVE to let it out.


I was cruising at a comfortable pace and suddenly getting passed left and right.  I was a little anxious that my solid swim and bike had led to a mediocre run allowing those behind to catch me, but then I realized it was mostly sprint distance people as they turned into the finish line at the start of my second loop.  But, I was caught at the 1.5 mile left to go mark buy a guy I knew was in the Olympic distance.  I decided to pick it up and pace him to see if I could hold on for a repass.  Around 1 mile to go I decided it would have been a jerk move to pace him in and try and pass him at the line.  The race opted not to body mark age groups, so I had no idea if he was in mine or not.  Be that as it may, I gassed it at mile 5 and surged past.  I was very much redlined from 5 to the finish.  I must have sounded like a herd of elephants breathing so hard, but I had it so I went with it.


It’s a 6 minute improvement from last year, but I was actually hoping for more.


I guess it’s a good and bad deal when you think about how good I felt for the race and still shaved off 6 minutes.  But, last year had 40 mph winds and was just not much fun on the bike.  Such perfect conditions and feeling good, I was hoping it would translate into a better AG finish.  But, my group was one of the largest and fastest.  Hosed.


It’s probably also better than one would expect after welcoming a newborn (child 3) home 4 months ago and both parents working and big kids in school.  Sleep is a luxury that I get more of than my wife, but still feeling the burn. 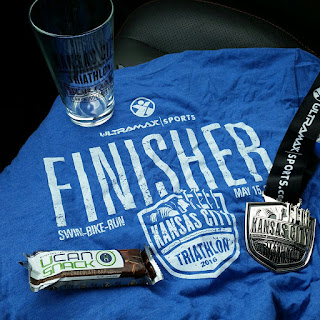 
I avoided the race port-a-potty pit stop.  I did go on the bike twice and actually on the run twice.  I figured I was already dirty from lake water and from the bike, why waste the time using a proper potty… Just go, man.  #Hydrated


At the start it was rather chilly and I was debating the intellect of signing up for a mid-May race, but once I got into it, it wasn’t an issue.


4 of my athletes I coach raced the sprint distance.  All finished and for two it was their first ever triathlon.  Happy to report they enjoyed it and will be doing more! 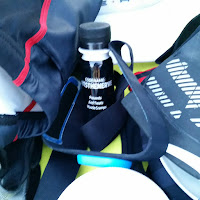 If you can, I highly recommend getting in an open water swim before your first race of the year and riding the course at least once.  That way you get a feel for the road and maybe even some flat tire repair practice and a reminder to make sure you have replacement tubes and parts on your bike for rides! 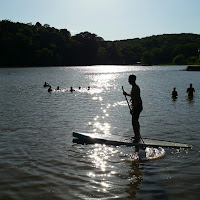 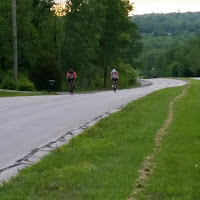 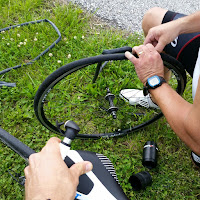 Prep is key.  Don’t want until the last minute to get everything together and ready to go.  Stress is no fun.  Triathlon is supposed to be fun! 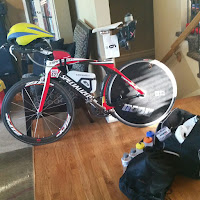