It only took over 2 months, but here it is! 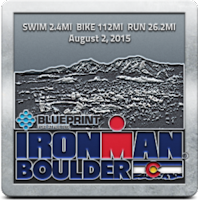 For anyone following me on Facebook or Twitter, by now you know I was successful at attempt 4.  I'm now 3-1 at the 140.6 distance!  SWEET!

It was wetsuit optional, so in order to be included in AG results (cause we all know I was going to Kona qualify) you had to go without a wetsuit.

I opted to go with a Zoot speesuit and stay with the non-wetsuit crowd.  I did this with Choo, but Boulder was a still water reservoir swim and Choo was down river.  Same setup for gear, different result.  I did suffer some nice chafing and the water was COLD! I was shaking and cramping from being so cold in the swim and was never so excited to pee on myself in the water multiple times to stay warm.

I also suffered since I added some body art throughout the summer that ate into swimming time, and I think my swim suffered from it.  I also concluded I need to add more freestyle without buoys and more kick board work.  Need to get that 10 percent from leg work in the future.

The start was a rolling swim start, which nice not to battle 2500 at the start, but it was wall to wall people from start to end of the swim.  Don't be fooled, you'll run into and get run over the entire swim.

Now... that sucked because I was borderline hypothermic with shivering, shaking, cramping and somewhat disoriented.  It took a bit to warm up, get changed and get my wits about me to find my bike.

The bike course was pretty excellent minus the two monster climbs on the tail end.  That's what you want after biking 100 miles is 2 miles up into the wind.  NOT.  Those last two climbs sucked, but the downhill into town was awesome.

Elevation really wasn't an issue (my Garmin reported around 4200 feet).  So many people worry about biking in Boulder thinking it'll be in the mountains.  It's mostly in the foothills and very little climbing, especially compared to something like Ironman Tahoe.


It did take 5 miles to get warmed up and stop the teeth from chattering from the cold swim...

My goal was to stay under 150 bpm (max was 149, avg was 131) around 90 rpm's and take in nutrition and hydration.  I wasn't concerned with speed.  I needed calories and needed some legs for the run.  I knew with the PF issues that my running would suffer so I needed to save what I could for the run.  I think I was pretty successful in staying in that range and leaving enough to get through the run. 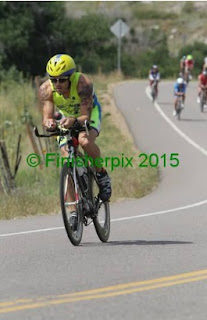 I knew it was going to be a long day on the run and wanted to make sure I got everything I needed.  At least I had my shoes, unlike Lee and thankfully Carla was there to save his race from missing shoes.

I changed socks, lubed up feet, chafe points on clothes and all other sensitive areas.  On the way out I was lathered down with sunscreen and it became VERY apparent how much the swim and my speedsuit had chafed my neck.  WOW that was a painful sunscreen application.

This was the worst IM run I have had to date as far as time goes (but at least I finished compared to DNF at Texas!).

Like Texas and Choo I started cramping.  I have come to the realization that hydration, salt, nutrition etc is only one factor to my cramping.  I took what I could, but the reality was I was under trained for the run and just muscle fatigue lead to muscle failure.

Learning my lesson at Texas, at mile 8 when the cramps started coming on, I elected to walk it off instead of trying to push through.  I ended up walking all downhills to avoid the quads from locking up.  Any twinge and I walked it off.  No point in cramping up and being done for the day.  I knew I had time to walk the entire run leg if I needed to.  The goal was finish, not a PR.

It was a functional strategy until you get about 0.75 miles from the finish and the last thing you want to do is walk with hundreds cheering you to the end.  I underestimated how far the finish line was and ended up running and cramping right as I crossed.  The catchers were great, but sitting on a cot or sitting at all was NOT going to end well.  I walked it off at the finish chute and started the long process of packing gear and heading back to base.  It made for a great finish line image. 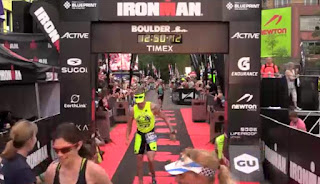 Good for second best time for an Ironman distance race.

Luckily there was a 24 hour fitness in Boulder that I could hose off before my hour drive back to base in Denver.  Wish I was staying local at that point, but you do what you can on a budget.

That was the most painful shower ever to realize just how chafed I was.  Everyplace you could think that would be most uncomfortable to chafe, that's where I chafed.  Image running water over that and then some soap to try and get layers of lube, dirt and salt from sweat off.  Not fun but I felt SO MUCH more like a human after cleaning up.  It was also nice to get back to base and go right to bed without worrying about cleaning up.

Addressing some thoughts pre-race, I'll go over some post race thoughts I had.

PF - I had suffered a severe case of plantar faciitis about 6 weeks out from the race.  I was reduced to elliptical workouts for runs and switched to the ASICS Gel Quantum 360 shoes for running.  Overall I was successful in getting the PF to go down and be able to race, but the lack of running at the peak of training definitely hurt me on the run with cramping.  I finished, so you can't say much.  Managing injuries is just a part of Ironman training. 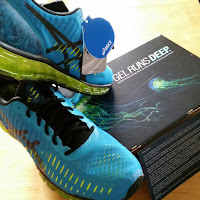 The event overall was great.  I wrote a review of Ironman Boulder on examiner and I thought the RD was top notch.  He utilized social media so well and in so many more ways than any other RD.  The Facebook page was the place to go for updated information about the race aside from emails.

I had great time with IM Boulder.  I'm still hooked on the IM bug and looking forward to more races in the future.  Not sure when and where, but I will be back for another IM.