Another weekend, another out of town race!

I qualified at the Shawnee Mission long course tri back in July by winning 1st in my age group.

I qualified last year, but timing just didn't work out to race.  I really wanted to last year since it was so close in Omaha and who knows if I'd qualify again.

Well, I did qualify again and after discussions on the home front, I went for it!  Who knows when the opportunity will come around again.

It was the second destination race in two weekends, which really puts a strain on the home front.  My wife took one for the team and stayed behind with kiddies while I drove out Friday to check in, stay overnight and race Saturday.  I pulled another road trip right after the race back home.

Let me just tell you... the traffic was crazy tight in this little park with over 2000 athletes expected for the olympic tri on Saturday.  Parking was at a premium even for check in.  They were parking us in the center of lanes.  It was madness! 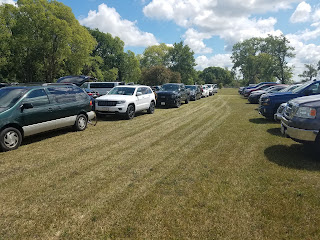 I did have a goal.  Top 18 were eligible to take a spot at the worlds in Austria, and roll down went to 25.  I honesty thought after my showing at Boulder, top 25 would be doable after my gains in the run and string showings on the bike.  The swim would be the so-so showing.  After poking around for gear, taking some tourist pictures and wondering around I decided to head to the hotel and prep for the race. 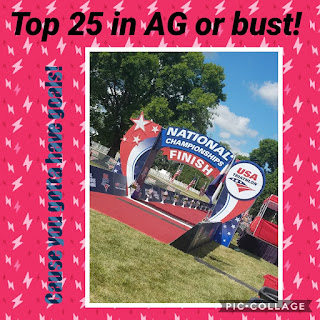 Staying less than 4 miles from the race venue has its perks.  One was waking up with just enough time to apply race tats, pack up, load up and drive over.  Second was being able to get at the venue 10 minutes before transition opened up at 5am and get a SUPER AWESOME parking spot right by the port-a-potties.  Being an early bird has advantages since they delayed the start of the race by 30 MINUTES because of the delays in parking.  While everyone else was sweating out getting set up, I was kicking back in my car, have some snacks, water and staying warm.  Did I mention it was a chilly 60 degrees in the morning?  Better than the high of 100 I heard about last year! 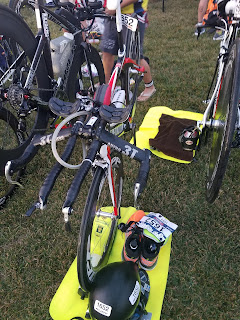 Products
What I used.
Hot Shot - I suffer from cramps regardless of training, hydration or chemical balance. I popped Hot Shot before the swim and before the run. I did have an issue after hopping on the bike with some inner thigh cramps and had to take it easy on the first few miles.  Made the mistake thinking I didn't need it for the start of the bike.  Guess again!  Run was no problem!

Supposedly the water temp was 80+ degrees, and non-wetsuit legal.  You could have fooled me when I jumped in the lake.  It was chilly and they had us sitting in it waiting for 3 minutes to start.  I was shivering uncontrollably.  Next time... take my time getting in.

It was your typical wave start with thrashing, bumping and getting swam over and in front of.  After 500ish meters, we broke up pretty good and it wasn't much of an issue aside from feeling like the turnaround kept moving.  Garmin said 1800 meters, but who's counting.

BIKE // 1:12:31 // Not e a bike PR for Oly
As I mentioned, I was oddly cramping at the start of the bike, resulting in taking it easy for the first 3 miles.  It wasn't a huge issue as the first few miles were a slight incline and wouldn't have been a hammer fest anyways. 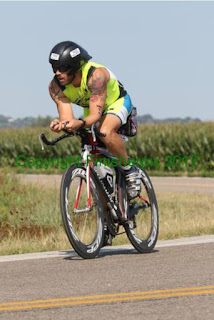 After mile 7 or 8, after the one big hill climb, I put the hammer down for what I could do.  I was looking good til the turn around and what felt like an incline all the way back to transition.

My bike fit didn't limit me too much, but I stretched a couple times a few miles out from transition.

I was definitely looking for more on the bike...

As a matter of fact, this was a PR for any 10k distance whether it was part of a race or stand alone.

I was pressing hard, but keeping form allowing me to hit sub 7:00 for overall for the run.  In the past my races were made on the bike and over time it's transitioned to being made on the run.  Just need to get a grip on that bike part! 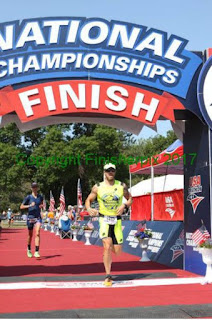 For never having raced nationals before, I was humbled after reaching a PR of 2:29:34 (previous PR was 2:30 something, so not a huge PR) and only placing 54th in my age group out of 113.  This wasn't Kansas anymore.

I'm pleased to at least get 54th among a stacked field of qualifiers.  I was humbled thinking I could smash my previous PR and came away with a slight PR.

If you ever have the chance to race at nationals, I highly recommend taking advantage.  It was a great experience being around so many like minded people from around the country.