Ahhhh back to triathlon racing!

Last weekend was the 33rd annual Open Options Shawnee Mission Triathlon put on by Johnson County Parks and Rec.  33 years.... put on by the same people.  Many athletes commented on how well put together and laid out the race is.  After 33 years in the same spot, I'd hop so!  :)

As I have mentioned, I was a race ambassador and on Team Red with Conrad.  Thanks to help from his father and his company, Team Red made their fundraising goal early, but happy to report that all 7 teams surpassed their goal of $1000, the first time it's happened.

It's a great race in a closed park, so no traffic to worry about other than athletes on the bike course when they all get out there.

It was pretty much like every typical race day.

But, I decided to ride my bike to the race and ride home after for some mileage on the bike.  Typically I would not recommend that, but my short term target is Boulder 70.3 and IM Florida, so bike mileage was important this weekend as well.

Plus I had a direct route and could ride paved trails into the park and avoid a lot of hills on the road.  It actually worked out great minus the nerves of hoping for no flats and a few spots where I should have brought a full on head lamp instead of a handlebar mounted little light.  I made it.  It's all good.

Oh ya... got into transition to see my backpack had fallen open.  Luckily nothing fell out and it was on like donkey kong.  Whew.

Since we had assigned bike rack spots, and I have done this race several times, I knew the drill and actually got up around the same time I would have even if I drove.

The best moment of setup came when they announced that water temp was 70 degrees.  Wetsuit legal!  You know I packed mine and I couldn't get it out fast enough!  July 9th, 85+ degree forecast?  Wetsuit legal, you bet!  Be ready for anything!

We swim from the swim exit to the start at the swim beach and line up for a rolling start.  Knowing I had a full sleeve suit (yes I got hot, but who cares, I killed it!) allowed me to line up with people I had no business swimming with.  I would say about 10 percent of athletes had wetsuits and the front runners only had a few.  For once, we were on a level playing field and I actually held my own on the swim.

With a long run from exit to bikes, I had plenty of time to get the top peeled off to kick off the bottom and get on the bike.  Transition was a tad slower, but I probably gained 2 to 3 minutes with the suit.  Score one for me!

The bike was a energy balance equation.  It's a pretty hilly loop for 4 laps, and a lot of people burn their matches right away.  I paced the first two and put more into laps 3 and 4.  My goal was minimum 20 mpg without killing myself, and that's what I pretty much got.

The run was where I wanted to push it.  We had a monster hill in the first mile and last mile had a long climb and a short steep hill right at the finish.  I lot of people peter out on the last long climb and that's where I made some ground catching some people in my age group.  I would like to say I passed a guy at the bottom of the last steep hill and cruised to the line, but he picked up steam and shot past me with 25 yards to go.  He was in my age group, too, which kind of sucked.  He said something like "thanks for that last bit of motivation to catch you at the line.  I was running out of steam until you passed me."  Sure thing.  I'm here to motivate!  :) 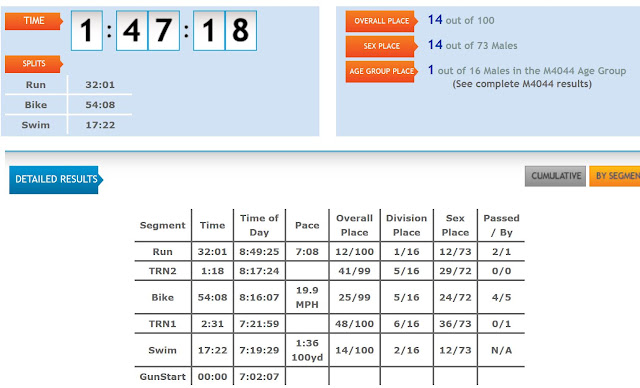 Yes, that's a 1 by my age group ranking.

Yes, that's my fastest time ever for this swim.

No, I didn't hit 20 mph EXACTLY, but close enough.

Yes, that's my fastest run split for this course ever.

Yes, it appears I'm getting faster with age, and I'm not just winning my new age group due to only people getting slower.  :)

And with that, I leave you with some handy advice from thoughts on the race: