It's about time, RACE REPORT FROM APRIL!
April 9, 2016 was the 2016 edition of Rock the Parkway half marathon.

I always eye this event as a half PR attempt since running is the easiest activity to maintain over the winter.  Biking is mostly trainer and swimming is inside at the gym only.  No options for OWS and neighborhood pool swimming.

Main goal, maintain a 7 min/mile pace for 6 miles without extraneous pee stops, assess and go for it for the last 7.1.

First 6 miles
First mile was rough at 7:32, but that's usually the case with the crowd before thinning out and really getting warmed up.  It was a little chilly before the race, but not horrible.

After that there was only one mile over 7 min and I made up time on other miles. 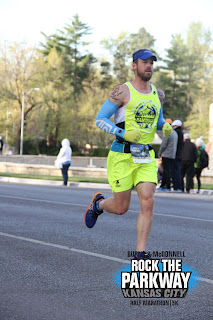 $hit.  That meant I had a real shot at a PR, and even better, sub 1:30.  Time to suck it up and it was all guts with some training to wrap this sucker up.

The first 6 miles I could fake it for pace, the last 7.1 would really tell then tale if my training was worth its salt.  Add a newborn in January to total up 3 kids, and a new job = very sporadic training and more like maintaining schedule.  Basically I was happy getting any kind of workouts in.  Mostly spent in speed and strength work with 1 long slow run a week.  I also opted to drive to the race instead of ride my bike.  AND, I opted not to gorge on trail mix and run full for the race.  Planning.  It's a wonderful thing when done appropriately.

Broke the seal
At mile 8, I had to pit at the turn around at the park.  To have a real shot at sub 1:30, it needed to be fast and efficient.  Basically I was sliding my bib around to the back and pretty much ready to go when I shut the port-a-potty door.  I'll save the details except to say that I was shorts up and out of the potty before I was all the way done.  Sort of like peeing yourself on the run, but only at 10 percent volume.

I wasn't ready to run the last 5 miles with soaked running shorts.  I could play off a little moisture... sweat, ya ya, that's it.

TMI?  Deal with it and read on, if you dare!

I needed to be aggressive the last half and I knew the last 2 miles-ish would be downhill into the finish.  To make up for the pee stop and the first mile, it was lights out.

To be honest, it was all guts at that point (was pretty much all guts from mile 2 on).  From my years of experience, you may get faster, but it's not easier, if that makes sense.  To be faster, you have to be willing to suffer and your body has to adjust at operating at that extreme for extended periods of time.

Getting faster does not happen without effort.  As speed goes up, effort goes up, too.  Accept the suck, or don't go fast.  Check out the heart rate vs pace over the race.  Obviously I was paying the price at the end. 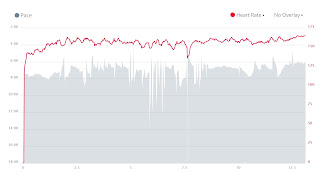 That last mile was suffering at it's finest.  I rarely run 6 min/mile in training and to run it after 12 miles at 7 min/mile pace was beyond my comprehension of what I could really do.  You just don't know until you push yourself to the limit. 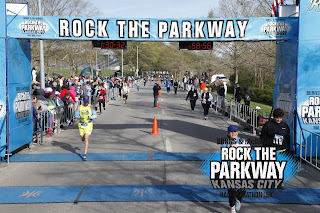 Honestly I didn't think I had it in me to bust my PR by 6 minutes and get sub 1:30.  I don't know if I will be able to maintain the fitness to reach that again or exceed it, but at least I can scratch that off the bucket list.

"Look kids, dad could actually move at one point in his life".

Thanks to Simply Hydration // UCAN // Team Banana Hammocks // ASICS for gear and nutrition that I use!