That was my major lesson from IRONMAN 70.3 Boulder 2018.  Stark contrast from the same race in 2017 minus bike course changes.

Before we jump right in, I wanted to share a few pit stops I made while in the endurance mecca, Boulder, CO.

Retul's HQ is in Boulder and they threw an open house for their experience shop that featured Specialized gear.  After all, they are owned by Specialized.  I have had a Retul fit done, and it was OK, but it's like any other tool out there.  It's only as good as the person using it.  I sat down with Jason and chatted a little bit about what makes for a good fit and what you should have in mind when/if you start looking to expend the resources to get a fit done.

I'm envious of you all that live around Boulder.  Did you know that CU has an excellent resource for triathletes?  ANYONE can use the services, not just students.  They have professional run analysis, bike fit and swim analysis on campus.  I stopped by Swim Labs and spoke with Anne, who in her own right is not a swimming slouch and runs CU's swim program.  Swim Labs is also an official IRONMAN partner and IRONMAN certified coaches like myself get a discount for athletes.  Contact if you want to know more!  Great resource!


Live at CU Boulder with Swim Labs Boulder and Anne to talk swimming! IM certified coaches get a discount on the service! Track me down at www.SetThePaceTriathlon.com to learn more AND/OR sign up to be a beta tester for our membership site starting 9/1.
Posted by Triathlon Training Daddy on Friday, August 3, 2018

I drove into Denver Tuesday.  I wasn't consume with adaptation to the altitude more so than getting to job sites for my day job.  I had 4 active projects in Denver and 2 potentials to visit.  It was extremely convenient to combine work and racing.  Reduces stress being away from the family for more trips an helps spread out some costs.  Wednesday and Thursday was pretty busy getting work done, fitting in some taper week training and then heading to the VRBO in Boulder.  Solid 4 miles from the Rez entrance on the back roads.  Worked out perfect. 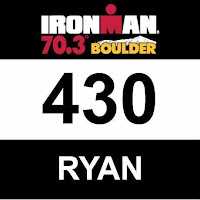 I'm not going to bore you with all the ins and outs of IRONMAN village, check in, etc.  Instead I'm going to jump into the thick of the race logistics, what happened, and my recommendations for the future.  As always, if you have questions, feel free to hit me up.

This is like a carbon copy of 2017.  Same course minus the start style.  Wetsuit legal.  Rez swimming is the best.

What was interesting was the start was changed to a TT start.  BUT, unlike other TT starts, they separated the groups by a few minutes each.  So the 30 minutes and below group headed out and then the 30-35 group I was in hit the water like 2 minutes later.

While I appreciate doing away with the waves making people wait an hour to get going, one realization for me was this did not reduce the contact I dealt with the entire swim.  Honestly I probably could have been faster had I not had to swim over, around and whatever to avoid getting hit and kicked by others.  It was like that the entire 1.2 miles.  Much the same in 2017 with waves starts.  If this start style is repeated at any other events with breaks between groups, I'm moving up a group and starting the back to avoid the collisions.  It seriously detracted from my time having to stop, move over or regain momentum avoiding people.

The bike was interesting.  In 2017 the course was around 2 miles short.  My average was around 20.5, so no real gains there.  The course was also slightly different for 2018.  After checking, elevations were about spot on, but it felt like a little more effort to get through some climbs this year.  Maybe just a perception thing.

One tactic I changed this year was working harder on the bike testing the fitness in cycling I had been working on over the winter.  I had a solid race at 70.3 Chattanooga in May 2018 and rode conservatively to have something for the hilly run then.  Boulder would be pretty flat on the run, so decided to ride aggressive to see what happens on the run.

Couple things in retrospect on that decision.  Riding harder didn't really net me much time savings.  Harder effort got me 0.2 MPH faster which is just a few minutes, which will later demonstrate my point that I confirmed that killing yourself on the bike is not a good race plan.  Just because a course is flat does not equal faster on paper.  Flat courses mean more time grinding the pedals whereas hilly courses like Choo allow for cresting of hills and conservation of energy on the down side.  Much different strategies.

I also noticed A LOT of drafting.  Blatant.  6 to 7 riders at a time inches off each others wheels.  They would pass me and just slide back over to the right in line without anyone trying to pass.  Even an older gal I was chatting with at the swim start was drafting in the race.  Seriously... ride your own race.

Time to pay the piper.

Forecast was spot on.  Sunny and 90+.  They day before and after were in the 70-80's with clouds.  It lead to a false sense of security that my race plan to hit the bike hard and I believe I would have enough for a solid run was delusional. 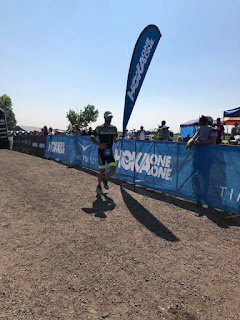 This was so disappointing after the last 70.3 paces around 8 min/mile and lower at Boulder 2017.  I held a decent pace until mile 8 and the bike effort and heat caught me.  I drank at aid stations and walked each one after mile 8... but the damage was done.  I was severely dehydrated and no amount of water was going to get me back in the race.  My blood had to be the consistency of molasses as my stomach had shut down.  Muscle wise, I drank my HotShot and was good to go.  No cramps.  Turnover was no issue.  About every 0.50 miles the gut said NO MORE an I was reduced to walking.

I was pissed to say the least.  Following up the 5:03 at Choo in May with a 5+ hour effort and a crappy run at Boulder was a lot to take in.  Luckily I had 5 miles of running/jogging/walking to cipher on it.

The run course has been the same since first time I ran in 2011.  2 loops around the rez on gravel/dirt roads with no shade.  3 different experiences on the same run.  It happens.  2011 was crappy as well, but it started much earlier.

While I'm not exactly happy with this time, I don't want to poo on anyone's accomplishments that take more time.  The heat made that run tough.  Props to all that got it done.

For my expectations and that next rung on the ladder of sub 5 hours, this race blew chunks, and I almost did literally as well.  I was cooked at the finish.  I didn't even realize a KC native/tri friend was my catcher until I left the finish area.  I was probably a little bit of an ass, but I also was severely dehydrated.  It took a solid hour and a shower at the swim beach and hydrating to get back to feeling well enough to pack my gear and hit the road to drive 9 hours back home to Kansas City.

While still annoyed, some of the biggest stumbles can be great learning experiences.  Now I know if there's a chance to over reach on a bike potion, then make sure it's not on the hottest day of the month.  Had it been last year's weather, the run could have been different.  More water on the bike could have helped.  I was probably over the 1% dehydrated I target and after that, it's a losing battle even on a cool day.  Either taking in more water, or reducing bike effort would have paid more dividends on the run.  The 2 to 3 minutes given up on the bike could have saved me 15 to 20 minutes of walking.  I also forgot zip ties for my speedfil tube which lead to kind of tying it in a knot around the stem.  It kinked and at times took some effort to get water.  The bike IS THE BEST TIME to get hydration and nutrition.  I did fine on nutrition, but hydration, not so much for race day conditions.

Another race, another experience to draw on.

Don't get me wrong, I appreciate very much getting to do this sport.  Not everyone can chase their passions like this.  BUT, I do work had for my passions.

All the training can't make up for a bad race plan.  Lesson learned that I cannot plow through a severe weather day and expect good results.  You just can't ignore the heat an try to race through it.

If you have read this far, if any of my ideas resonate with you, you want to know more, anything.... consider jumping in the ring to be a beta user for my membership side of my coaching site.  Beta users will be chosen 9/1/18.  Launch will be Black Friday 2018.  You may even get a sweet deal if not chosen for a beta user, but you have to send your info in!  Visit www.SetThePaceTriathlon.com for info and link to the form.

Finally, thanks to the people and products I appreciate most. Future members will get discounts on these products and I'm only working with those I use and believe in.